I Took Revenge On My Ex (by getting a hotter girlfriend)

Добавлено 1 год назад by admin
20 Просмотры
Hey! My name is Jordan and I’ve been best friends with Marcus since middle school. We are very different, but that’s why we get along so well. I tend to keep to myself and don’t talk much, while Marcus is funny, charming and a huge extrovert.

About a year ago, I met my girlfriend, Angela, at a computer club. I really liked her, and I couldn’t believe it when she agreed to go on a date with me. It wasn’t long before we were going steady and I couldn’t have been happier.

But there was one problem. Whenever my best friend Marcus hung out with us, my girlfriend Angela wouldn’t stop flirting with him. She acted as if he was some kind of god and I hated it.

I mean, I know I’m not as funny as Marcus, but seeing my girlfriend always laugh at his jokes, made me feel very insecure…

And when the three of us were together, they talked to each other all the time while I stayed quiet… It was so awkward!

What made it worse was that Angela kept asking me to invite Marcus over. It made me feel like she only dated me to get closer to him.

That’s why I came up with a plan to take revenge.. and show Angela how I felt:

My sister, Julia, has a friend, Rachel, who’s a model. I asked my sister if Rachel would be interested in earning $50 to hang out with me and my girlfriend Angela for a bit. I figured that if Rachel flirted with me the way Angela did with Marcus, she’d understand why I didn’t want him hanging around with us.

My sister and Rachel loved the idea, so I invited Angela to have a board game night with them. And she agreed.


Once we had a game out, I made my first joke and said, “Uff… This board game is more complicated than math tests!” Rachel started to laugh so hard, she almost fell off her chair. She said “You’re right! You’re so funny, Jordan.”

My girlfriend Angela wasn’t laughing, though. She already looked annoyed. Which meant that my plan was working!

After a bit, I said, “this game’s alright, but why don’t we play beer pong?”

Then Rachel said, “that would be so much fun! I bet you’re amazing at it!” And then she fluttered her eyelashes at me, doing this cute little giggle.

To be honest, Rachel was almost doing too good a job. She was flirting so hard, I felt a little uncomfortable, but I figured it was all part of the plan.

After a while, my girlfriend Angela asked if she could talk to me in private. When we were alone, she got really angry and said “Stop flirting with that bitch. She’s all over you. She’s laughing at everything you say, even though it’s not funny. It’s pathetic. You need to tell her to leave!”

I loved seeing Angela all jealous. Now she knew how it felt to worry about losing me.

I asked her, “So how come you can laugh every time my friend Marcus opens his mouth, but the second a girl seems interested in me, I have to get rid of her?”

Angela shook her head and said: “That’s different. There’s nothing going on with Marcus.”

Then I told her “Well I like it when someone enjoys my jokes, and if you don’t think they’re funny, you can go home.”

“Fine. I will!” She stormed out, saying, “Forget about seeing me again – it’s over between us!”

When I told Julia and Rachel what happened, they were really sorry, but then Rachel had an idea. “Why don’t we pretend we’re a couple?” she suggested. “We can put up photos of us together on Instagram. I bet it’ll make Angela even more jealous.”

So we started a fauxmance and you’ll never believe what happened. Angela came up to me at the computer club and begged me to get back with her. She even apologized for flirting with Marcus and said breaking up with me had been a huge mistake.

I was tempted, but in the end, I decided to stay single. If it wasn’t for Rachel pretending to be my girlfriend, I don’t think Angela would have wanted me back. And once I’d thought about our relationship, I wondered why I’d want to be with someone who made me miserable and kept talking about how great my best friend was. Did you know she used to complain I was too short and told me to go to the gym because she was embarrassed by how I looked?

Dating Angela was a mistake, but that’s okay. I learned from my experience and won’t date someone like her again.

Some things she said made sense, though. She was right - my social skills weren’t great, so I got a part time sales job, which forced me to learn how to talk to people, maybe even make some jokes. I feel like breaking up with Angela made me grow up a bit.

Anyways, thank you for listening and if you enjoyed watching this animated story, then please subscribe to this channel!

I Took Revenge On My Ex (by getting a hotter girlfriend) 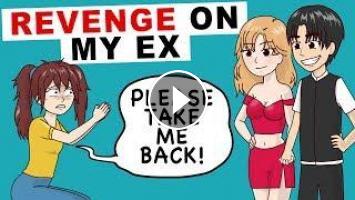 Hey! My name is Jordan and I’ve been best friends with Marcus since middle school. We are very different, but that’s why we get along so well. I tend ...