Добавлено 1 месяц назад by admin
41 Просмотры
It all started one night when me and my sister decided to stay up late. Suddenly, we heard something breaking! She quickly turned to me, and I acted as if I hadn’t heard anything. We waited for a few moments, and then we heard the same sound again! My sister was standing there shaking, and asked me to go to the kitchen with her, but I said no way! I was petrified!! I thought that there might be a burglar in the house and I whispered in her ear, “I hope it’s only one of us that’s going to die!” So, she went to the kitchen on her own. A mere few seconds later, I heard her scream, “You idiot! What are you doing outside? This is unbearable!” I headed to the kitchen where I found her dangling from the window waving both her hands in the air and screaming, then she fell out of the window! Thank god we live on the first floor! I looked out of the window to find my dad wearing a bowl over his head. He was in his underwear holding a raw chicken in one hand and his car keys in the other. I almost peed myself laughing at the way he looked! My dad’s a sleepwalker, but this time he’d kinda taken it too far. I mean, I was like...is this for real? Where was he planning on going with that chicken?! That wasn’t the first time though. He’d done some silly stuff in his sleep before. He once ate my sister’s homework! Oh my god, I almost pass out laughing every time I think about that. My sister’s teacher didn’t believe her when she told him what our dad had done. He thought that she was pulling his leg or something. So, he asked dad to come to the school, only to find out that she was telling the truth, and that dad actually did eat her homework! To this day, the poor thing still gets picked on by the other kids in her class. Ever since that weird event, my dad has been taking strong sleeping pills. For some weird reason I’ve always found my dad’s sleepwalking super amusing. When he started taking his medication, I felt like our life had become boring! My sister spends most of her time texting or hanging out with her friends, and my dad spends most of his time working, and I don’t really have friends to be honest. I was dying for some entertainment in my life!! So, I decided to do something very stupid. When there was no one around in the house, I snuck into my dad’s room and replaced his pills with Tic Tacs. The first couple of nights, nothing happened. I was disappointed and gave up on the idea that there’d ever be entertainment in our house again. That was, until that one night when my life got turned upside down. I woke up feeling a horrible pain! It felt as if there was a knife tearing my face apart! I put my hands up to my face and felt some kind of warm, sticky liquid! Oh my god, 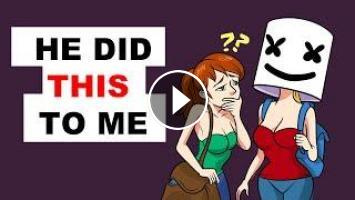 It all started one night when me and my sister decided to stay up late. Suddenly, we heard something breaking! She quickly turned to me, and I acted a...