It's a little complicated, you see. Inside the Octagon, the Nigerian-born New Zealander is just two wins away from perfecting his art, in the middleweight division anyway, and becoming a UFC champion.

But there is still so much more to be done when it comes to one of his other great passions, and truly living what it means to be "The Last Stylebender".

Sitting down with ESPN ahead of his UFC 236 showdown with American Kelvin Gastelum [16-3], Adesanya [16-0] opened up on his love of anime and cartoons, the story of Naruto in particular, and how he had drawn strength from the fictional Japanese ninja and turned it into an unbeaten UFC record.

So who is Naruto exactly? Is he more in the Street Fighter or Dragonball Z mould?

"Where do I start? Naruto is just a kid - you can't even make this a long story, short - but he's a kid who inspires me based on the way he was brought up and his will-power; his will-power really inspired me, and his morals that he has for his friends and his family, and his code.

"His ninja code could never be broken and I really respect that; not just him but a few other characters like Rock Lee and Shino, Akamaru or Shikamaru; a lot of them. I draw strength from characters that aren't even "real", quote unquote, because they're animated.

"But they're real for me and it's all about what's in here, what you feel in here [the heart] and I can relate to those guys more than I can to some of the great leaders of our time."

Adesanya has swept all before him inside the Octagon over the last 14 months. Having first fine-tuned his arsenal throughout Australasia, he eventually stepped up to the UFC in February last year and has since won a perfect five from five fights, including two victories by TKO.

From the moment he enters the Octagon to when he summons an opponent closer, just as he did Anderson Silva in Melbourne back in February, it's clear just how the fictional has found its way into Adesanya's reality, even if some sequences are still to be refined.

"You see me try some [sic] I've seen in cartoons or video games and I'll pull it out in the Octagon because, I don't know, I can do it," Adesanya said. "I blurred the lines between reality and fantasy; I am that line: The Last Stylebender.

"[Naruto's signature move] is Rasengan. I can't hit that in the Octagon, yet. But, Sakura, she has a really strong punch. I'm yet to display it in the Octagon, but, eventually, maybe in this fight or the next, I will deaden someone with one of those Sakura punches. Stay tuned."

Just how Adesanya perfects the Rasengan in the future will be worth watching, given its composition as a spinning ball of Chakra [energy]. Maybe it's an irresistible open-handed palm to the chest?

Whatever the case, the world of Japanese anime and cartoons is anything but a passing obsession for the 29-year-old middleweight.

"I wanted to be animator when I was growing up, I still will, I will have my own production company after fighting, and I will hire people who will actually bring my vision to life," Adesanya said. "But yeah, that was one of my things that I wanted to do was to be an animator and work for someone like Widder Productions or Disney.

"Seriously I used to watch Disney cartoons and I wouldn't even watch the story sometimes; like Tarzan, I think by the fourth time I watched I finally got the story because I was just watching the fluidity of the animation, like when he's going through the trees. It was just cool watching all that kind of [sic]...that's what I love about anime, the fight scenes in certain anime; it's such fluid animation, really really crisp. It jazzes me up."

He won't need jazzing up before his fight with Gastelum in Atlanta this weekend.

"It goes my way. It goes my way or the highway," Adesanya said. "For me I'm ready, I've been ready for about three weeks now; but I've just had more time to even get extra ready. And I've got momentum on my side, I just fought in February, I actually fought, I'm ready to go. I'm raring to go. I'm champing at the bit but I just can't get too eager just yet, I just have to get all this out the way and make that walk into that Octagon."

Defeat Gastelum and the prized showdown with Robert Whittaker -- who was forced to pull out of his title defence against Gastelum in Melbourne, thus creating the need for the interim bout - becomes a reality.

You can just imagine the animated UFC poster. With all the history of the trans-Tasman rivalry, it designs itself. 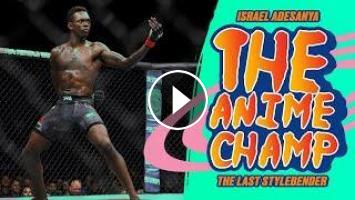