Добавлено 2 года назад от admin
74 Просмотры
Kellen voices Overhaul in My Hero Academia, Funtime Freddy in Five Nights at Freddy’s, Rekka Hoshimiya in Fire Force, Reita Toritsuka in Saiki K, Nijimura Father in JoJo’s Bizarre Adventure, and many others! I love Kellen’s story about his personal hero and about one of his superpowers.

About Anime Adventures:
I’m Elise Baughman and I’m an actress, TV host, and the voice of Pan on Dragon Ball GT—among other characters. On Anime Adventures I interview my fellow anime voice actors and others as I travel the country going to comic cons, anime conventions, and recording studios.

Kellen Goff is a Los Angeles-based voice actor, on-camera actor, and audio engineer. Since the age of 5, he's been practicing and perfecting his crafts, getting into theater acting, on-camera, and voice over professionally at 13, and still keeping with it today. Though he is known for his work as Funtime Freddy, Molten Freddy, and Fredbear in the FIVE NIGHTS AT FREDDY'S series, Kellen has also been honored to play the roles of Overhaul in MY HERO ACADEMIA, various characters in BLIZZARD'S HEARTHSTONE, The Grineer Boss Nox in WARFRAME, and Mansaku Nijimura in JOJO'S BIZARRE ADVENTURE.

This interview with Kellen was filmed at My Hero Con: Texas Smash! It was held in Irving, Texas. 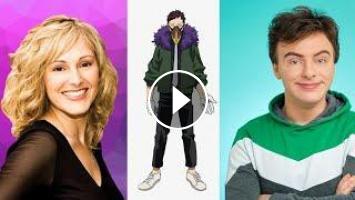