Добавлено 1 месяц назад by admin
3 Просмотры
Both 「ADAMAS」 and 「unlasting」 from LiSA are really amazing pieces, but what makes 「unlasting」 stand out is the serene atmosphere and the way the music is building up before each chorus. Definitely one of my favorite musical moments is the sudden drop in volume during the third chorus in 03:28, and LiSA's voice is shining brighter than ever - it's truly magical.

I also didn't know that the composer for「unlasting」- Kayoko Kusano - was also the same person, who has composed 「Gurenge」. This might explain the exotic pentatonic melody lines which is played by various instruments in the background.

Speaking of exotic, 「unlasting」 is also featuring a rarely used instrument in today's pop music: the Erhu (string instrument). The sound of Erhu immediately reminds me of "the exotic, far east" and I personally think it has one of the greatest vibrato sounds of all string instruments. No matter how often I hear it - I always feel nostalgic for some reason.

Another prominent feature of this song is the Ostinato (frequently recurring motif) which is playing the melody [C-D-F-G-Bb] at the beginning part, the verse part and the chorus part of the song. I tried to incorporate the ostinato as well in the piano, most notable during the chorus in 01:04 and 02:24 by using the three hand technique.

I usually spend the most time to make the bridge part stand out, because this is the key moment of every song: Suddenly a new element is introduced and melodies are further being developed. 「unlasting」 is no exception and during the bridge part in 02:56, the Erhu is playing a fantastic solo part. After experimenting on the piano, I found out that using a tremolo in the right hand is creating a sound which resembles the vibrato sound of the Erhu the most.

Last but not least, the final chorus in 03:45 deserves some mention as well. Usually, the final repeat of the chorus is the moment where the music is reaching its climax, but I did the opposite this time: The chorus melody is played in an impossibly high piano range, almost like a music box and it's slowly unwinding itself. It is hard to explain, but I think in that moment, I just wanted to have a moment of peace, a short moment of introspection.

To be honest I was having a very rough time this week and this arrangement has turned out more dramatic than my usual arrangements. In a way, all my piano pieces are reflecting my current mood and it essentially serves as a musical "memento" for me. Most of the arrangements which stands out above the rest are born in times of big distress I was going through. Brave shine, Owari no Sekai Kara, My Dearest, just to name a few.

But even after saying this, I know that I still have to continue doing my best, because there is always a light at the end of a tunnel. Thank you for reading and I hope you enjoyed my piano arrangement of 「unlasting」. Your support means a lot to me. 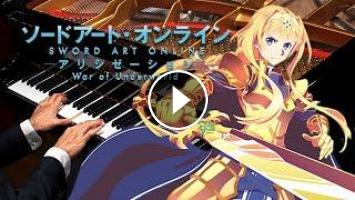 Both 「ADAMAS」 and 「unlasting」 from LiSA are really amazing pieces, but what makes 「unlasting」 stand out is the serene atmosphere and the way the music...